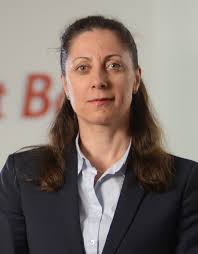 Eriola Bibolli, joined ProCredit Bank Kosovo in 2001 and in 2019 she was appointed Chief Executive Officer of ProCredit Bank Kosovo. Mrs. Bibolli has a university degree from the Faculty of Economics of the University of Korça, and in 2005 obtained an MBA from Bradford University in England. Meanwhile, Mrs. Bibolli is engaged as Vice President of the Board of Directors of the German-Kosovar Business Association in Kosovo since July 2021.