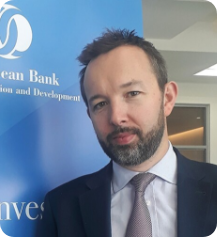 Neil Taylor is the Head of Office representing the EBRD in Kosovo. He joined the Bank in 2009, originally coordinating the Bank’s business advisory services (based in London), and then he led the Bank’s SME activities in the Kyrgyz Republic, Tajikistan, Turkmenistan, and Uzbekistan (based in Bishkek). Prior to joining the EBRD, he worked for the UN in Iraq, Gaza, New York, and Indonesia, and for Accenture in the UK. Neil has degrees from Oxford University and University College London.